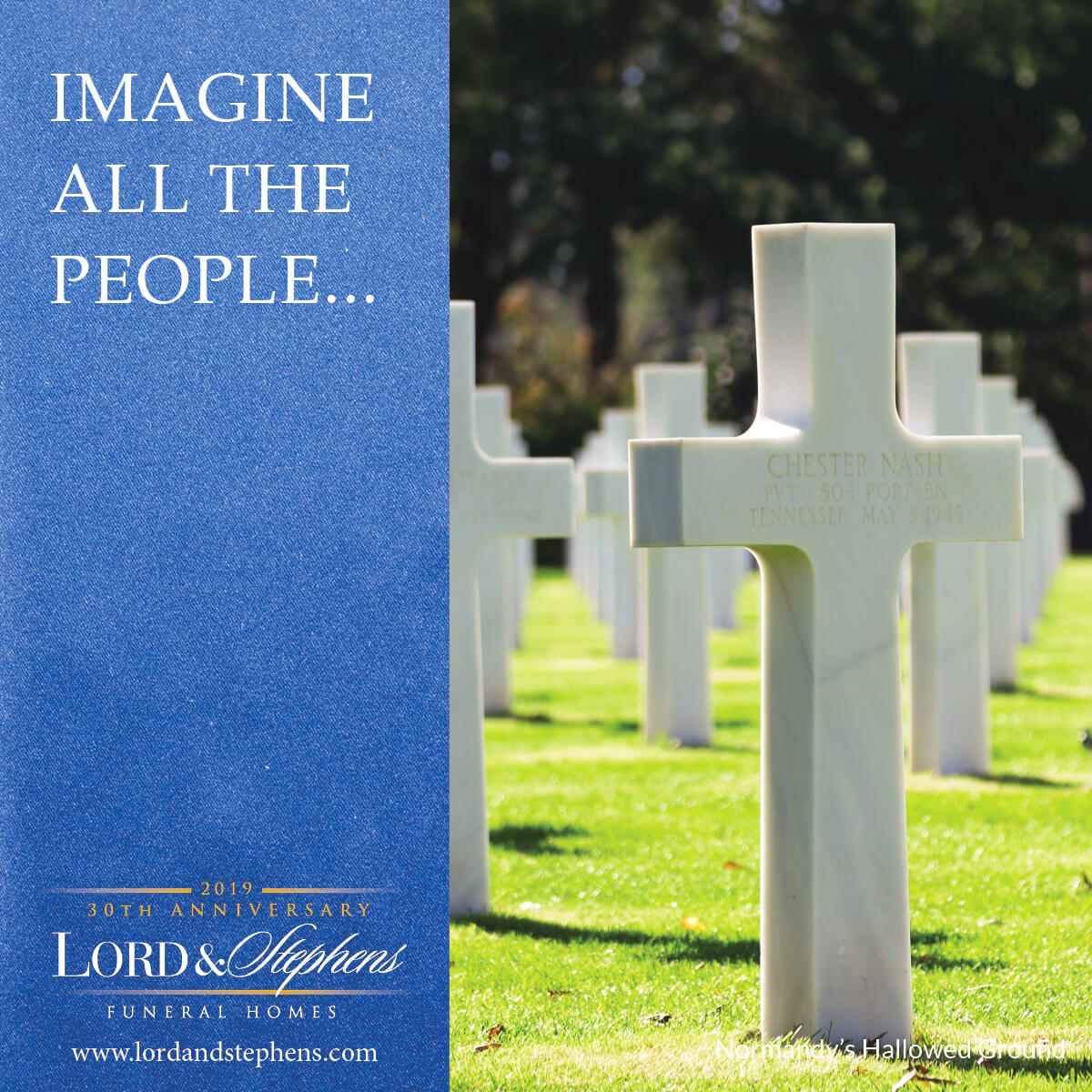 On June 6, 2019 the world will mark the 75th anniversary of the Normandy Invasion during World War II. The invasion by the Allied Forces established a foothold on the shores of France; and was the start of the Allied advance into the interior which eventually lead to victory in Europe and liberty for the millions of people living under the tyranny of Adolf Hitler. The costly battle was the most important allied victory in the second world war.

The campaign began on June 6 and ended on June 30. During that period 425,000 Allied and German troops were killed, wounded, or went missing. Many are buried in the 27 war cemeteries, ranging in size from 30 graves to 20,000, in Normandy.

The Normandy American Cemetery is the resting place for 9,387 Americans, most of whom gave their lives during the landing operations and in the establishment of the beachhead. The headstones are of white Italian marble adorned with a Star of David for those of Jewish faith and a Latin Cross for all others. The permanent cemetery is located on land France granted to the United States in perpetuity.

For those fortunate enough to visit the burial grounds, the experience is singular.  Approaching alone or with a group the mood changes. Breathing slows, the chatter quiets, tones are hushed. The feeling is somber. It draws you in.

And then, there it is, pristine lush green lawn dotted by thousands of white markers in perfect formation overlooking the very beaches where those buried here fought and died.

Visitors are, at first, overwhelmed by the sheer number of markers. But as you get closer and begin to read the engravings, the reality of the cost of war begins to sink in.  So many died, they were so very young, and all lost in such a short span of time.

All those lives ended before they ever really began. So many who would never find their true love, hold a new born child of their own, or buy a home. So many who never got to experience all the post war changes the rest of us take for granted. Those buried here did not live to see air travel become commonplace, a man land on the moon or watch a color television.

They were heroic and their sacrifice was great. We must never forget.

In the words of the late John Lennon…

Imagine all the people Living life in peace

Lord & Stephens Funeral Homes has been serving families with the highest quality funeral, burial and cremation services in northeastern Georgia since 1989. Their staff of dedicated professionals provide personalized and meaningful ceremonies for each family they work with. They have locations in Athens, Watkinsville, and Danielsville, Georgia.

If you need our services immediately, please call one of our locations.
We will begin the process of bringing your loved one into our care right away.